Wicklow, often called “The Garden of Ireland” has been a popular tourist destination for many years, due to its scenery, beaches, walking, hiking and climbing options, and attractions including the ruins of the monastic city of Glendalough, Wicklow Gaol and water-based activities on reservoirs and the coast.

The Wicklow Way is the oldest waymarked long-distance walking trail in Ireland.

County Wicklow was the last of the traditional counties of Ireland to be shired in 1606 from land previously part of counties Dublin and Carlow. Established as a distinct county, it was aimed at controlling local groups such as the O’Byrnes. The Military Road, stretching from Rathfarnham to Aghavannagh crosses the mountains, north to south, was built by the British Army to assist them in defeating the rebels still active in the Wicklow Mountains following the failed 1798 rebellion. It provided them with access to an area that had been a hotbed of Irish rebellion for centuries. Several barracks to house the soldiers were built along the route and the Glencree Centre for Peace and Reconciliation was built alongside the remains of barracks there. Battalions of the Irish Army use firing ranges in County Wicklow for tactical exercises, especially the largest one in the Glen of Imaal which was previously used by the British Army prior to independence.

The ancient monastery of Glendalough is located in County Wicklow. During the Cromwellian invasion of Ireland, local authorities immediately surrendered without a fight. During the 1798 rebellion, some of the insurgents took refuge in the Wicklow Mountains, resulting in clashes between British troops and the troops commanded by General Joseph Holt (1756–1826) near Aughrim and later at Arklow. 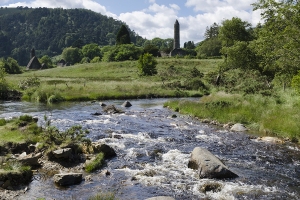 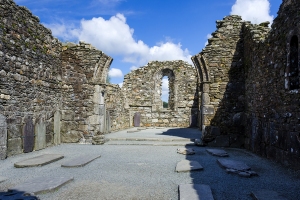 This article uses material from the Wikipedia article “Glendalough, Co. Wicklow”, which is released under the Creative Commons Attribution-Share-Alike License 3.0.