Mussenden Temple is a small circular building located on cliffs near Castlerock in County Londonderry, high above the Atlantic Ocean on the north-western coast of Northern Ireland.

Perched on the cliffs overlooking Downhill Strand, it was once possible to drive a carriage around the temple: however, coastal erosion has brought it closer to the edge. The temple was built in 1785 and forms part of the Downhill Demesne. The demesne was formerly part of the estate of Frederick, 4th Earl of Bristol, who served as the Church of Ireland Lord Bishop of Derry from 1768 until 1803. It was Lord Bristol – popularly known as “the Earl-Bishop” – who had the “temple” built. Constructed as a library and modelled from the Temple of Vesta in the Forum Romanum in Rome, it is dedicated to the memory of Bishop Lord Bristol’s cousin Frideswide Mussenden.

Over the years the erosion of the cliff face at Downhill has brought Mussenden Temple ever closer to the edge, and in 1997 The National Trust carried out cliff stabilisation work to prevent the loss of the building.

The inscription around the building reads:

Named in honour of his cousin Mrs. Frideswide Mussenden, whose beauty he greatly admired, this was the Bishop’s library. Its walls were once lined with bookcases. A fire was kept burning constantly in the basement. This and its enclosed flue meant that, even in this very exposed location, the books never got damp.

“I intend to build a Grecian temple in Frideswide’s honour…I intend to build it on the edge of a cliff. It will give employment to the poor, to the district and employment.” The Earl Bishop was clearly heart broken when Frideswide died. His notes on the building state that it was based on Bramante’s Tempietto on Rome’s Janiculum hill, which itself based on the Temple of Vesta at Tivoli near Rome. The building was probably the work of Micheal Shanahan who accompanied the Earl Bishop on one of his many visits to Italy.

Now part of The National Trust property of Mussenden Temple and Downhill Demesne, the grounds encompassing Mussenden Temple, and its manor house (Downhill Castle) are open to the public all year, from dawn to dusk. The “Temple” offers views westwards over Downhill Strand towards Magilligan Point and on across to Inishowen in County Donegal; and to the east, Castlerock beach towards Portstewart, Portrush and Fair Head. 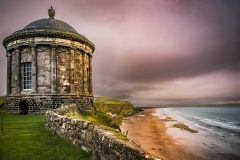 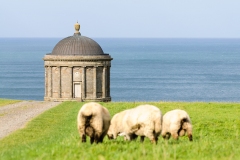 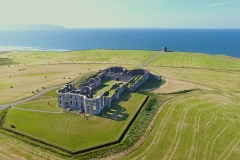 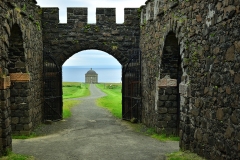 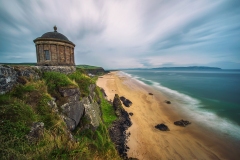