Moneygall is a small village on the border of counties Offaly and Tipperary, in Ireland. It is situated on the R445 road between Dublin and Limerick. The 2011 Census counted 310 people in the village (153 males and 157 females). This was an increase of 12 people (4%) since the previous census in 2006. Moneygall has a Catholic church, two shops, a post office, a national school, a Garda station and two pubs. The nearest Church of Ireland church, Borrisnafarney, is 2 km from the village beside the former Loughton Demense. 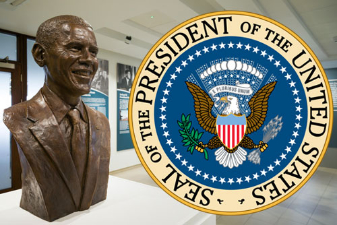 The village has received international attention for being the ancestral home of Falmouth Kearney, a maternal great-great-great grandfather of Barack Obama. Obama visited the village in 2011.

Moneygall is on the R445 regional road and close to the M7 motorway where Junction 23 provides access to the village.

Bus Éireann no longer provides a service to Moneygall but some of JJ Kavanagh and Sons services between Dublin Airport and Shannon Airport continue to stop in the village. Bus service 854 operated by Local Link Tipperary between Roscrea railway station and Nenagh calls at Main Street and Obama Plaza. The service operates seven days a week.

There is no train station in the village but the nearest stations are in Nenagh, Cloughjordan and Roscrea, all on the Limerick-Ballybrophy railway line, a feeder service to the main Cork to Dublin line, operated by Iarnród Éireann.

There is one Catholic national school in the village. The former Church of Ireland school (now used as a parish hall) was built in 1888 beside the R490 Borrisokane turn-off, and closed in 1976, when its pupils were transferred to the neighbouring village of Cloughjordan. An earlier building, constructed around 1800, was previously used as a school. It was then used by the local Church of Ireland community as a chapel of ease until the late 1970s. It has now been converted to a private residence.

Children travel mainly to either Roscrea or Nenagh for secondary schooling. The nearest third-level institutions are Tipperary Institute in Thurles or the University of Limerick, Limerick Institute of Technology and Mary Immaculate College, all of which are in Limerick.

Falmouth Kearney, a maternal great-great-great grandfather of Barack Obama, 44th President of the United States, emigrated from Moneygall to New York City at the age of 19 in 1850 and eventually resettled in Tipton County, Indiana. Kearney’s father, Joseph, had been the village shoemaker, then a prosperous, skilled trade. The whole Kearney family emigrated to Ross County, Ohio, in the first half of the 19th century. Falmouth Kearney’s youngest daughter, Mary Ann, moved from Indiana to Kansas after her father’s death in 1878. Mary Ann Kearney was a paternal grandmother of Stanley Dunham, President Obama’s maternal grandfather.

On 23 May 2011, Obama and his First Lady, Michelle Obama, visited Moneygall as part of a visit to Ireland. They arrived to a rapturous reception by 5,000 people. The President was greeted upon arrival by his eighth cousin, Henry Healy, and following a walkabout on the main street where they shook hands with many local residents, the Obamas entered a house that had been built on the site where Falmouth Kearney had lived. Afterwards, they visited Ollie Hayes’s pub to meet more of the President’s distant relatives and to study the birth records of his ancestors. President and Mrs. Obama drank Irish stout to the traditional toast, sláinte (meaning “good health”), and Mrs. Obama went behind the bar to learn how to pull a pint.

The Barack Obama Plaza service area was opened at Junction 23 of the M7 on the outskirts of Moneygall in June 2014.