The Guildhall in Derry, Northern Ireland, is a building in which the elected members of Derry and Strabane District Council meet. It was built in 1890.

Guildhall as of August 2016 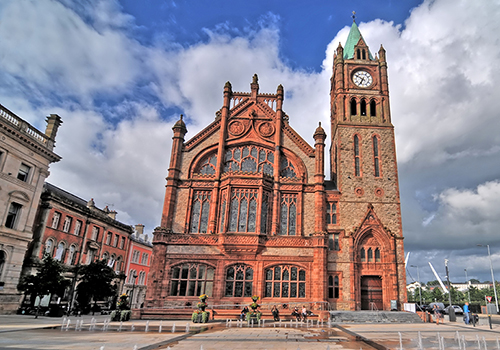 During The Troubles the Guildhall was the focus of multiple terror attacks. The building was badly damaged by two bombs in 1972, but was restored at a cost of £1.7 million and reopened in 1977. On 23 September 1980 the Field Day Theatre Company presented its first production, the premiere of Brian Friel’s Translations, in the Guildhall.
The square in front of the Guildhall regularly plays host to important events and was the site of U.S. President Bill Clinton’s address when he visited the city in November 1995.

The Guildhall was also home to the Saville Inquiry into the events of Bloody Sunday from 1998 to 2005.

H & J Martin, the contracting firm which built Belfast City Hall, began major restoration in August 2010. External work, costing £3 million, included the restoration of the stonework, roofs, windows and stained glass, as well as the clock. New steps and a ramp were also built at the entrance at Guildhall Square. Restoration of the stained glass windows was overseen by Stephen Calderwood, who had last worked on them with his father Jack when they were damaged in the bombings of 1972. Internal work, costing in the region of £5 million, involved the full internal reorganisation and restoration of the Guildhall as a key tourist attraction and arrival point for the City as part of the Walled City Signature Project. 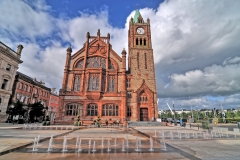 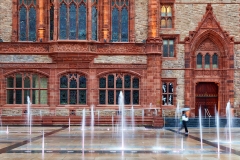